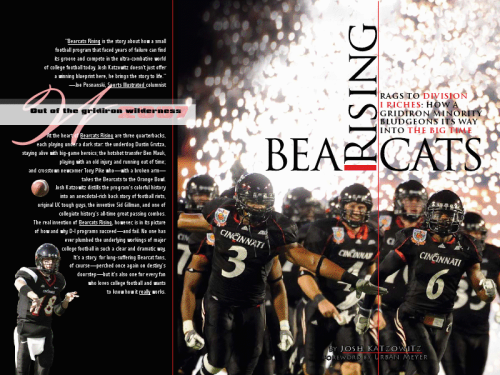 Order it here. Or you can wait to buy it directly from me.

Thanks much to the Cincinnati Enquirer’s John Erardi for the complimentary story about Bearcats Rising on Aug. 16, 2009. 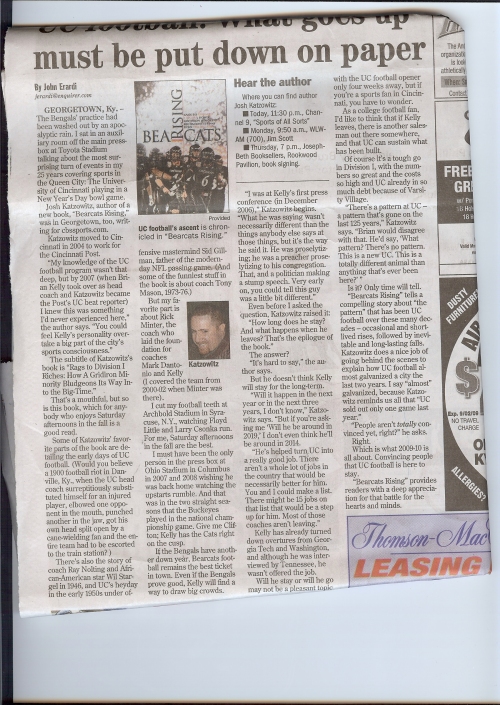 From the jacket of the book:

At the heart of Bearcats Rising are three quarterbacks, each playing under a dark star: the underdog Dustin Grutza, staying alive with big game heroics; the hotshot transfer Ben Mauk, playing with an old injury and running out of time; and crosstown newcomer Tony Pike who—with a broken arm—takes the Bearcats to the Orange Bowl.
There’s an undersized lineman who makes weight by hiding a barbell plate in his hip girdle, a wideout who spends a season living in his car, and an unheralded black belt safety who uses martial arts training to elevate his game into the NFL
They—along with the brassily charismatic new coach Brian Kelly—are the heart of a Bearcat team who refuses to die when once again, the University of Cincinnati football program finds itself imperiled.
Josh Katzowitz’s smart and lively new book is, in fact, a story of what happens when an aspiring Division I football program hits a crossroad. In the 125-year history of UC football, there have been a handful of moments when destiny was on the Bearcat doorstep. Each time, though, UC was destiny’s delinquent.
Katzowitz cleverly distills the program’s colorful history into an anecdotal-rich back story of football riots, service veterans who upset the Big 10 champs, the inventive Sid Gillman who left UC to transform NFL offenses, and one of collegiate history’s all-time great passing combos.
The inventiveness of Bearcats Rising, however, is in its carefully presented picture of how and why D-I programs succeed—and fail. Woven consistently throughout the dramatic scenes and character studies is the highly readable story of how major college football really works.
No one has ever plumbed the underlying workings of major college football in such a clear and dramatic way. It’s a story for long-suffering Bearcat fans, of course—perched once again on destiny’s doorstep—but it’s also one for every fan who loves college football and wants to know how it really works.

Back of the book blurb:

Bearcats Rising is the story about how a small football program that faced years of failure can find its groove and compete in the ultra-combative world of college football today. Josh Katzowitz doesn’t just offer a winning blueprint here, he brings the story to life. – Joe Posnanski, Sports Illustrated/KC Star columnist.

… Which is what 2009-10 is all about. Convincing people that UC football is here to stay. “Bearcats Rising” provides readers a deep appreciation for that battle for the hearts and minds – John Erardi, Cincinnati Enquirer

You like reading, and you like football, right? Sure you do. So why not give, “Bearcats Rising,” my buddy Josh Katzowitz’s upcoming book on UC football, a shot? – Anthony Castrovince, mlb.com

Fantastic. A must read for UC fans. – Lance McAlister, the king of sports talk radio in Cincinnati

And, then there was this. Unbelievable as long as it lasts. 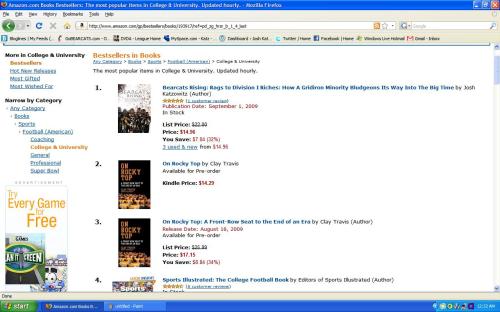