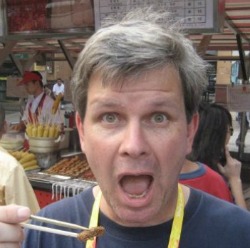 Geoff Calkins is a Harvard-trained lawyer who clerked for a U.S. Court of Appeals judge and worked for a 500-man firm in D.C. He took all that training and became … well … a sports writer. A very good one, in fact, who was an influence on me when I interned at the Memphis Commercial Appeal in the summer of 2000. In our chat, we talk about how tough it is for a sports writer to maintain a daily radio show and the energy time suck that it becomes, why Harvard Law produces U.S. presidents and Memphis sports writers, and why Calkins has stayed as a columnist in mid-sized city despite opportunities to leave.

He also discusses why he’s OK hosting a daily radio show in Memphis while his former colleague John Robert is the chief justice of the U.S. Supreme Court.